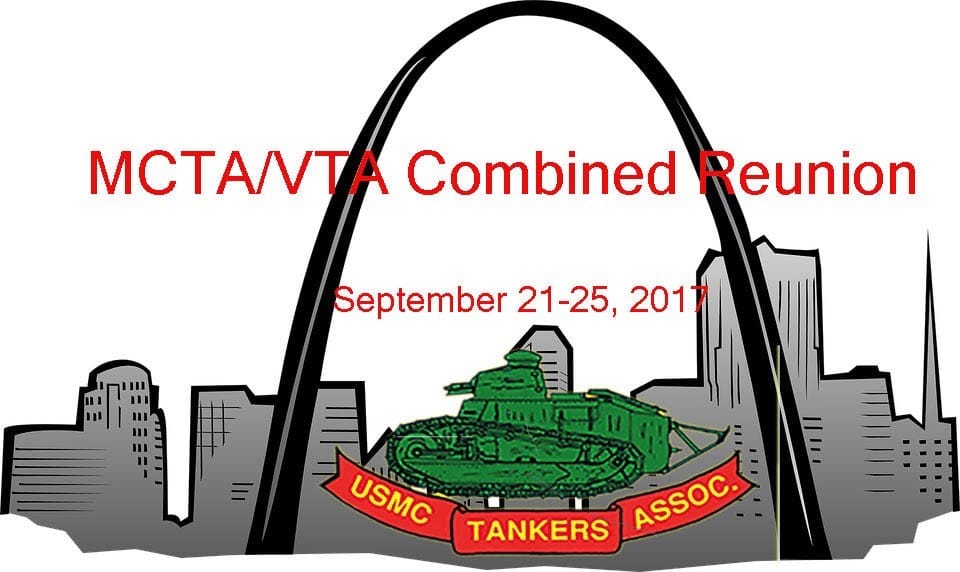 Happy Birthday To Our Tanker Family

I am focusing this message on encouraging all who can attend the combined reunion in St. Louis to do so. Members who belong to our MCTA Association and the Vietnam Tankers Association will not have to choose one reunion or the other to attend in 2017. Coming to St. Louis in September, one will be able to see friends and comrades from both organizations.

I do regret that this year’s registration will cost you an additional $25 per attendee. If this additional registration cost would preclude your attendance, please notify me by the most expeditious means possible. I will dig into my own pocket. That is the importance I am placing on YOU attending this combined reunion. Furthermore, any member that has ever hosted a reunion or similar affair knows the importance of having a fairly accurate head count as early as possible. This allows planners to tailor events and supporting logistics at the lowest possible cost and ensure that everything is properly coordinated.

Please read in detail the report by your scholarship committee chairman, Steve Chambers. Your Association expends both finances and time, ensuring that those eligible have an opportunity for scholarships. Your past life memberships, current annual dues and support of our reunion raffle coupled with sound financial management by your board of directors makes this possible. On behalf of the board of directors, I thank you.

I conclude with the hope of seeing as many of you as possible in St. Louis. I thank the Vietnam Tankers Association for extending the invitation for a combined reunion. Time will tell how successful this initial effort at closer association will be, but I’m sure a good time will be had by all.

Soon you will receive a letter from the Directors asking for your choices about the future direction for our Association. Please answer the questions and return your reply with this year’s ballot. It is important that we receive input from as many members as possible, therefore, we are making this extra effort to
contact everyone about the upcoming proposals and expenses. Remember, this is your Association and we at the Headquarters work for the benefit of this Association but we cannot work in a vacuum. Please reply quickly. 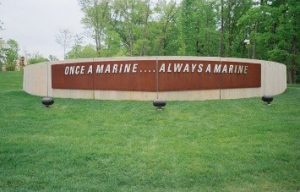 Your Scholarship tickets will soon be delivered. Please join in our annual drive by buying them and contribute more so that we can continue supporting our Marine families.
Thank you to Jane Harding who is trying to retire as my assistant. She has worked for you the last six years providing data base expertise. A thankful greeting to her replacement goes out to Maureen Studenka who has taken on the mantle of data processing. Welcome Maureen! I would like to devote all my time to membership from now on and l need to find a replacement for my duties as Executive Secretary. Write or call if interested or recently retired and looking for satisfying volunteer work helping Marines maintaining a connection to the Corps.

In issue 1-2017, I wrote a short article about the website, urging folks to take a look. This is about the mechanics; how to get on, what to look for, and maybe how to add some of your pictures to the gallery and how you can help keep it current.

So, the first trick is to open the web Easy to follow steps

Looking for MCTA members who are willing and able to represent the Association at the various regional military fairs, conventions, museums, and other events where Marines are likely to attend. The mission is to establish face-to-face contact with Marine Tankers and their families to tell them about the MCTA and encourage them to join.
Our representative must have good people skills and be willing to coordinate with the local hosting organization to secure a table, shelter and other necessary items. The MCTA will provide banners, cards, and other promotional items to help make the mission a success. Additionally, I will provide admin support where needed or requested.
In my experience, this job may require you to be onsite to help set up the shelter, organize the table and be at the table to answer questions for up to 8 hours per day. We all live in different regions and are aware of those local events that draw Marine Tankers. We need your help in identifying those events and getting Marine Tankers to join the Association.
Remember- the pay is zero but the rewards are plenty.
I am working on compiling lists of annual and special tank/armor related events around the US. When you send me a positive reply, I will add you to a list of those willing to stand in at one of these events.
Please use me as a point of contact in this effort. If you are willing and able to be one of our forward representatives, please send me an email at richhine@comcast.net.

For Friday’s reunion kickoff event, there is a chance for attendees to win a free room. Ticket stub will be in your packet available for Thursday pickup. No late arrival or entries.

Many meals are on your own (O. Y. O.) but venues are always within walking distance. This reunion is no different than the ones you are used to in terms of being at the appropriate place on time. Updated itineraries will be posted on the “Torsion Bar” door.

No trip to St. Louis would be complete without the Budweiser Plant tour. Notice shuttle buses will be traversing between three locations. Times and length is of your choosing. Times for the tram over the Arch have been reserved in advance at forty per trip.

This is a combined reunion and the Vietnam Tankers Association has made all of the arrangements. Schedules, times and special circumstances will be coordinated as specified in your packet. If an attendee requires special transportation needs, please indicate such with your registration.

Mail your registration before July 31

You must make your own hotel room reservations by August 30th to get the low room rate!
Call: 1-888-627-7066 and be sure to mention both the “Sheraton Westport Chalet” and “USMC Vietnam
Tankers Reunion” for the special room rate of $119.00 per night. The special room rate is good for three
days prior and three days after the reunion dates as well. Please note the regular hote room rate is $180
per night.

HOTEL REGISTRATION MUST BE MADE SEPARATELY BY YOU BY AUGUST 30, 2017

Send check ormoney order made out to: USMC VTA and the completed registration loon to:

The Marine Corps Tankers Association, as one of its core functions, offers a college scholarship program for Marines and Sailors who served in Marine Corps Tank Battalions and their eligible dependents.

Service members or a former service member must be able to establish their assignment and service with a Marine Corps Tank Battalion by official records. To be eligible, dependents must be able to establish a parent or grandparent who served in a Marine Corps Tank Battalion. Relationships beyond grandparents are not considered for awards.

This year, as in the past four, through the exceptional generosity of The LiCalzi Family’s “Ace in the Hole” Foundation, seven scholarships were awarded in the memory of 1stLt Michael LiCalzi who gave his life in combat in Iraq, along with the crew of his M1A1 tank. Mr. Greg LiCalzi, Michael’s twin brother, established the scholarship in 2014 in his brother’s memory. This scholarship provides $3000 stipends to exceptionally well qualified college bound and university students who are dependents of Marine tankers.

Additionally, five applicants were selected for the John Cornelius-Max English Scholarship. Three of those selected were continuations from 2016. Two others were new selectees. Each of the Cornelius- English selectees will receive a $2000 scholarship stipend.

All interested applicants are encouraged to apply now!. The application process is detailed and requires several items: letters of recommendation, GPA information, school activities information, etc. These need to get to the selection committee in a timely manner. Scholarship winners and notifications of awards will be done during April/May 2018.

LiCalzi Scholarship (year 1). Alexzonda is a daughter of a career Marine Tanker. Resides in Va. Beach. 2017 Graduate of Princess Anne HS with a cumulative GPA of 4.0. Plans to study medicine and become an orthopedic surgeon.

LiCazi Scholarship (year 1). Resides in Binghamton NY. His father served in the 8th Tank Bn. Graduated from Susquehanna Valley HS with a cumulative 4.0 GPA. As a senior, named Student of the Year for his achievements in science and engineering. 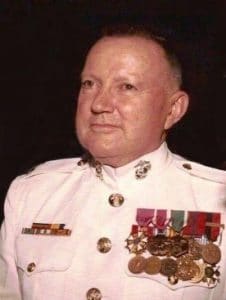 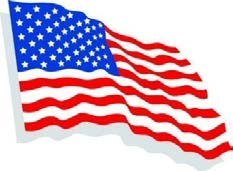 HAMPTON – Local Marine Corps legend, Colonel Paul F. Lessard, USMC Ret., whose service to our nation spanned 35 years, including combat tours in the Korean Conflict and Vietnam, passed peacefully on to his heavenly Father on Wednesday, May 30, 2017 surrounded by his family after courageously battling a long-term illness.

Lessard graduated from Hampton Academy where he played on the undefeated football team that won the State Championship in 1948 with his best buddy, Donnie Walker. He was married to Dorothy Quintal Lessard for 61 years and together they raised three children; Paul J. Lessard of High Point, N.C., Beth Schottman of Lenexa, Kan., and Sharon Folan of
Austin, Texas. He was also a loving and doting grandfather of seven and a great-grandfather of three.

During his retirement years in Hampton, Lessard served in local politics as Town Moderator; in leadership at his church, Our Lady of the Miraculous Medal where he ushered and was an officer in the Holy Name Society. COL Lessard was an active member of the Hampton’s American Legion Post 35 where he served in leadership and greatly enjoyed the fellowship of his brothers-in-arms.

The Colonel enlisted in 1951 as a PFC and rose up through the ranks, attending Officer Candidate School via the “Meritorious Noncommissioned Officer Program” and later graduated from both the Armored Officers Career Course at Ft. Knox, Ky., and the Armed Forces Staff College in Norfolk, Va. Throughout his career, in which he was affectionately known as the “Godfather of the Tank Corps,” he was proud to be a hard charging “Mustang” who held a deep commitment to and affection for “his Marines.” He served in 19 duty stations and was decorated on 14 occasions including two Legion of Merits with Combat “V” for gallantry in combat and the Vietnamese Cross of Gallantry. Lessard retired from active service as Colonel of Marines serving as Chief of Staff at Quantico Marine Base where he attended Officer’s Candidate School 27 years prior.

Colonel Lessard was a patriot, loving husband, devoted father, loyal son and brother, and a United States Marine
through and through, who was, to the very end “Always Faithful.”

The Lessard family want to extend their love and thanks to the Staff at Edgewood Centre of Portsmouth for their exceptional care and to his beloved caregivers; Maureen, Renee, Shay, Shirley, Stacy, Mary, Connie, Ronda and especially Meredith “Angel” who so loving cared for the Colonel in the last years of his life.

SERVICES: Visitation will be held from 4-7 p.m., on Monday, June 5, 2017, in the Remick & Gendron Funeral Home – Crematory, 811 Lafayette Rd., Hampton. A Mass of Christian Burial will be celebrated at 12 p.m., on Tuesday, June 6, 2017m in Our Lady of the Miraculous Medal Church, 289 Lafayette Rd., Hampton. Relatives and friends are respectfully invited. Burial with military honors will follow in the High Street Cemetery, Hampton. In lieu of flowers the family has requested you send memorial contributions to: American Legion Post 35 c/o: NH, 69 High St., Hampton, NH, 03842 or Compassionate Hospice Care c/o: 180 Orchard Dr., Unit 4, Londonderry, NH, 03053. Please visit
www.RemickGendron.com to view Paul’s memorial website, sign his tribute wall or for directions.